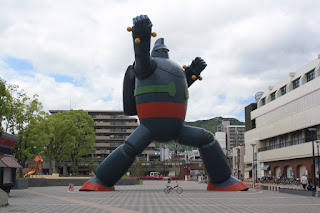 Hello All,
The last few days have been a lot of fun. The sailboat race happened yesterday, it was very strong wind and wasn't a big coarse so it didn't last very long. It looked like 30 boats entered the race, the dock was teaming with activity. The festival that happened on Saturday night was a blast. A few of the yacht club members showed me around and introduced me to a lot of folks. They had a bunch of booths with all kinds of Japanese food. It was all for sale but was very reasonable. They had a live band and lots of activities for the kids including tug of war. I got to help with that and we won 2 out of 3 times. They also had a bingo game and gave away all kinds of stuff. As usual I didn't win a thing.
Last night I was talking to a few of the folks at the yacht club and after it closed I was invited to one of the members home where he put on a really big spread of food . Chicken, fish, raw fish, to much to remember. His house was walking distance from the marina and we didn't get out of there till 11 pm. It was a good time had by all. They were really impressed with my chop stick ability. I find it really easy to use them. All of that being said I over slept for the eclipse. It was suppose to happen at 8 am but I didn't get up till 9. As it turns out it was pretty overcast so I didn't miss much.
I managed to get all of the groceries put away. It took me about 5 hours reorganizing and packing it all in as tight as I could. It all fit but it was very close. I think I am stocked up good now. I also rebuilt all 6 of my line winches used to raise the sails and put in reefs. They were in desparate need of a good cleaning and reoiled. It's one of those things that you forget about but so important to have.
That's about all I know for now.

P.S. I will be adding some pictures to the Kobe album so take a look.