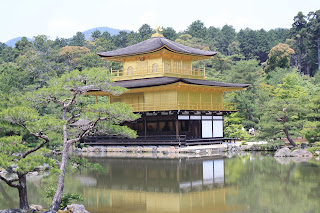 Hello All,
Saterday I helped Toshi put some wood rails on his boat. I forgot how much work and time it takes to cut and fit wood on a rounded hull. He also hired a carpender to help out which was good because he had all of the right tools for the job. The carpender and I had a really good time working on the boat together. He spoke really good english and has done many ocean passages when he was young on ships, He has also sailed allot so we had lots to talk about. He was in Los Angeles 40 years ago and saw the Westsail fleet when they were new. He is very impressed with my boat and I will sum up his comments about the boat by saying " very strong".

Yesterday I headed to Kyoto in the morning. Misaki her 4 year old son and another guy I met at the festival last weekend, Naoki and his wife all met me at the train station. They had the day all planned as to what and see and do. There is allot to see there and one day is not enough by a long ways but they showed me what they thought is a must see for a tourist. They took me to 2 very famous temples both built at or around the 7th centry. I have never been around anything that old. Where I am from we talk hundeds of years. Here they speak of thousands. The temples are very carefully looked after and if anything is old or rotten they replace it just the way it was built back in the day. They are beautiful buildings and have withstood earthquakes, Typhoons and what ever mother nature can throw at them. It is a testament of the building skills and attention to detail. We also visited a fresh market that took up 6 blocks. There was a shop for just about anything you like to eat, Jananese food of coarse. We had a wonderful lunch at a very old Cafe in the market. They told me it has been in business for 80 years.

The highlight of the day was returning back home. Naoki said the regular train would take to long to get back so he told me we will take the fast train. I have heard of this train in the states, I called it the Bullet train. On long stretches it is capable of 200 miles an hour. It was an amazing ride and the inside looks like a jet plane. It took us a half and hour to get from Kyoto to Kobe, less than half of the time on the regular train. The Bullet train runs about a thousand miles of Japan connecting North to the South. It takes 7 hours to go from end to end, thats an average of 142 miles an hour.

I had a really good time hanging out with my Japanese friends and they were great hosts.

The next 2 days I will finish my varnish work and get the boat all ship shape for Stefan who will be here Friday morning. I have been studing the weather systems for the whole route and it is a mixed bag of wind and pressure systems. It will be like a box of choclates , you never know what your going to get.

I will get busy now so I will talk to you soon.


P.S. I will add some pictures to the album under Kyoto.