Hello All,
I just wanted to wish everyone a Merry Christmas. Mom and I have been hanging out and enjoying the holidays. I have been making my way around to my friends and paying them a visit. Time has been flying right along and it wont be long before im back to the boat.
Have a good holiday and I will talk to you soon.

Hello All,
Mom and I went to Anchorage this weekend to see family. We all met up at a restaurant and had dinner and a wonderful visit with Aunts and Uncles and cousins. It was really cool to see everyone. It has been a year since I have seen all of them so it was cool to hang out for the evening. We also met up for breakfast Sunday morning and said our goodbyes. Mom and I made it home Sunday night and I have been busy trying to upload new pictures to the site.
I have new pics under Tonga, Samoa, and Fiji so take a look when you get a chance. I will also be uploading some video in the next few days so keep a look out.
I will talk to you all later.

I made it to Nikiski Alaska

Hello All,
I made it to Anchorage yesterday morning and was greeted to high winds threatening to cancel my 20 minute flight home to Kenai. I thought to myself, what the hell am I doing here. It was freezing, with the wind chill it was around -10 F. The wind came down enough for my flight to continue and I am at moms all cozy in her lovely frozen lake side home. My flights home went with out a hitch. It took a while to get here but it is nice to see my family again. It has been a year since I have been here and it nice to see most everything is just how I remember it.
I will be here just under 3 weeks so I will be busy visiting old friends and family.
Thats all for now so I will talk to you all soon.

Hello All,
I have made it to Hawaii, so far so good. I had a 10 hour lay over here so I took the bus to Waikiki Beach and am hanging out at a coffee shop. I had an 8 hour lay over in Nadi Fiji yesterday but lucky for me Toby and Nicole, the cast aways off of Curious were on the same flight out of New Zealand. There flight wasent leaving to the UK till this morning so they got a room at a back backer resort not far from the airport so I killed time with them. They bought me an awesome dinner at a Japanese Restaurant. It was fabulous, they cooked the fish and stuff right in front of you. I havent been to a place like that since I was in Hawaii last time. Speaking of that, I was thinking about the last time I was here in the Hawaiian Archipelago. It was 18 years ago, some stuff looks familiar but this place has grown up a little more it looks like to me. I look around and everyone is white as a sheet and talking about when they have to leave. I am glad im not a tourist lol.
I will be leaving tonight and will be in Anchorage in the morning.
I am going to explore some so I will talk to you later. 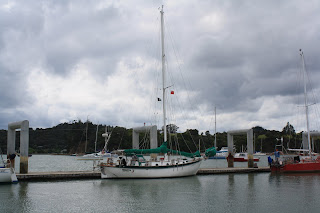 Hello All,
The last few days I have been busy fixing little things on the boat and getting it ready for me to be gone for 3 weeks. Jon returned for a few days from Auckland and hung out. He left yesterday back to Auckland to visit his old skipper he crossed the Atlantic with. He is from New Zealand and returned home after a 5 year trip around the world. Last week Rob and Ruth on Albatross the couple that Jon crossed the Pacific with arrived from Tonga on there catermaran. They are from South Africa and are planning on living here in New Zealand. We have been hanging out with them the last few days visiting. Yesterday Nick from Compass Rose came up to visit me from Whangarei. The car they bought here just came out of the shop so he wanted to get it out and take it for a drive. We went into Paihia, about 5 miles north of here and took the Foot Ferry to Russell. Russell is the old Capital of New Zealand and is a really cool little town. Rob and Ruth were on the ferry also with there friend Loraine so we teamed up with them and toured around and had some lunch.
I know all of this sounds like a mouth full, thats what I get for not writing a little sooner. The next time I will write I will be at home for the holidays so till then, I will talk to you guys later.

I'm back in Opua 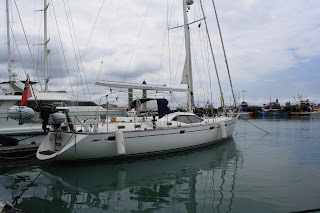 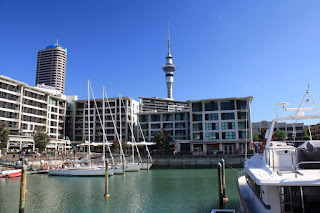 Hello All,
I just got back to Opua from Auckland a few hours ago. I took the bus up here and had a very nice trip. We had an awesome 3 day cruise down the coast on Curious. Steve picked some very nice anchorages to stay the night on the way down and also had a few lunch time anchorages. The Eastern coast was very nice with lots of bays to choose from. The weather could have been better but all in all was not to bad. We got to sail part of the time but had to motor a lot as the wind was almost on the nose. His boat sails to windward very well so we had the main up most of the time just helping out. We arrived in Auckland on Friday morning and got the boat tied up at the downtown marina. We were surrounded by mega yachts of all shapes and sizes. Just to give you a clue the Auckland area has in upwards of 8000 boats in marinas or on moorings, it was a sight to be seen. They don't call it Sail City for nothing lol. We helped Steve get the boat all cleaned up and through the weekend got it ready for him to fly home to the UK for a month. Curious will be moored in Auckland till March sometime when they will return and cruise around NZ then back to the tropics.
On Saturday afternoon Nick off of the Compass Rose came down from Whangarei where his family has the boat parked. We met them in Pago Pago and have stayed in touch the last few months. Nick, Jon and I went out and had a few beers and had a nice visit. After being out most of the night I helped Nick find a back backing hostel to spend the night and Jon took off with a friend that has been living here in NZ from the Basque Country.
On Sunday Steve and I and Terje, his friend from the UK that helped him make the crossing down here met up with his stow away crew that he had in Fiji. Toby and Nicole are here visiting NZ for a week then heading back home to the UK.
I met up again with Nick on Sunday after coffee and we just hung out in town for a few hours. We both made reservations to take the bus back today so we got to hang out on the bus and visit to Whangarei where he got off and I continued to Opua.
Kaisa, my crew I brought down here made the trip with with us on Curious. She was a lot of fun to hang out with and Steve made her helmsman and navigator on the boat. She did an awesome job and we will meet up again when I get back from Alaska and hopefully get the boat out sailing. I think she is going to tour the South Island for a few months then I don't know.
Jon said he is coming back up here in a few days, to do, well, do what ever Jon does lol. His sister will be flying in before Christmas so they will be touring around for a few weeks.
That's all I know for now so I will talk to you soon and it's nice to be back home again.

P.S. If you're curious about Curious go to http://blog.mailasail.com/curious and you can see my ugly mug in the Tuamotu's in Toau, look for Paradise found....Again!